Scientists from the University of Bremen and RWTH Aachen University are working with partners from industry to develop a new, automated, unmanned flight system.

How much energy a wind turbine produces depends not only on the wind, but also on the condition of the rotor blades. Currently, the turbines have to be taken out of operation for a condition assessment, which leads to high downtime costs for maintenance. The AutoFlow research project therefore addresses the question of how the rotor blade condition can be recorded and evaluated during turbine operation - literally "on the fly".

For the first time, a multisensor-equipped flight system is being used that can perform both thermographic and laser-based measurements.

"Through the experiences and results in this project, we hope not only to achieve significant savings in maintenance costs for the plant operators, but also to increase operational safety by being able to detect and rectify possible damage at an early stage," emphasizes Friederike Jensen, project manager at the Bremen Institute for Metrology, Automation and Quality Science (BIMAQ) at the University of Bremen.

In fact, the project plans to go one step further: the unmanned aerial system will not only be controllable from a distance, but will also perform fully automated measurements on nearby wind turbines.

"The harsh environmental conditions in the offshore area pose a particular challenge in the development of the automated flight system," says Tim Reuscher, head of the Mobility Department at the Institute of Automatic Control at RWTH Aachen University.

At the same time, the data is to be transmitted and evaluated in real time in order to obtain a quick initial overview of the condition of the plant on site. In this way, it can be decided directly which areas of the plant require a separate investigation.

The project is under the management of BIMAQ (Institute Director A. Fischer), which, in addition to coordination, is also responsible for the measurement technology to be installed on the flight system. The flight system and the hangar, which have to be particularly suitable for rough offshore conditions, are developed by the company Copting GmbH and supported on the software side by the company OECON GmbH.

The Institute of Automatic Control (IRT) of RWTH Aachen University is responsible for the development of the control of the flight system and its trajectories as well as for the control of the measurement routine during the flight. In addition, the research project is supported by the German Offshore Wind Energy Foundation and Deutsche WindGuard GmbH with regard to the definition of the (measurement) requirements as well as the validation of the flight-based measurement system. WindMW GmbH as offshore wind farm operator accompanies the development and the offshore demonstration of the flying measurement system in the offshore wind farm off Helgoland.

The AutoFlow project is funded by the German Federal Ministry for Economic Affairs and Climate Action with 1.8 million euros for the duration of 3 years. 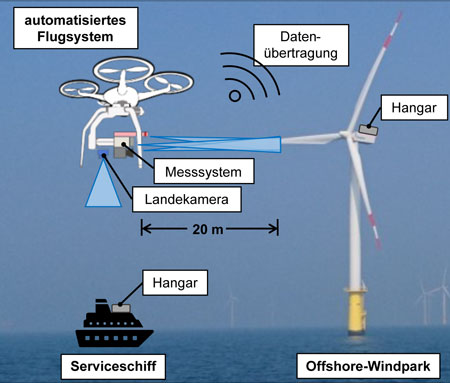 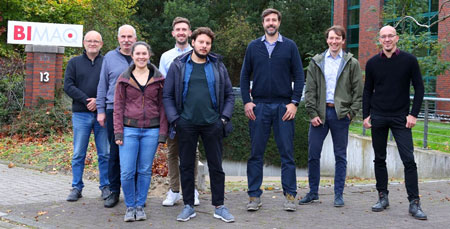 Project members at the kick-off meeting at BIMAQ